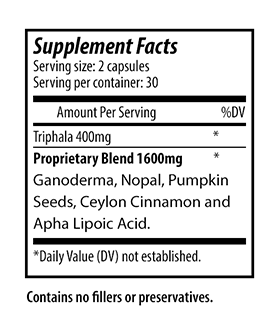 GLUCO-Kema is a combination of elements which are known to help lower and help control glucose levels on individuals suffering type 2 diabetes. A very littleknown ingredient called Triphala is present in GLUKO-Kema which makes it a very unique product among supplements marketed to support the fight against type 2 diabetes anywhere in the world. Triphala is a combination of three plants, Amalaki, Bibhitaki and Haritaki, these plants have been highly regarded for centuries in the Ayurvedic medicine practice for its amazing health benefits which include a very effective blood sugar control and help with weight loss as well as digestive health, on this last point it is known how well related diabetes and intestinal tract cleansing are, we believe that Triphala is a game changer in the combat against type two diabetes and judging by the results reported from our users, we are well in our way to help millions of people to just feel better.

The other ingredients contained within each capsule of GLUCO-Kema are: Nopal Cactus, Ganoderma Lucidum, Pumpkin Seeds, Ceylon Cinnamon and each of these have been the subjects of independent studies which reflect its individual benefits for persons with Type 2 Diabetes. In addition, Alpha Lipoic Acid is another element found in GLUCO-Kema, ALA has been not only known for its benefits in the combat against type 2 diabetes but also, its ability to kill free radicals may help people with diabetic peripheral neuropathy, who have pain, burning, itching, tingling, and numbness in arms and legs from nerve damage.

It is said that, over 30 Million Americans suffer diabetes according to official data which is close to 10% of the population. Of the 30.3 million adults with diabetes, 23.1 million were diagnosed, and 7.2 million were undiagnosed. Diabetes is now considered among the top ten causes of death in the United States of America due to its relation with cardiovascular diseases.

With GLUKO-Kema we can only hope to help as many people as possible in their fight to control this terrible disease. However, before taking this or any health supplement consult your physician.

Important Note: These statements have not been evaluated by the Food and Drug Administration. This product is not intended to diagnose, treat, cure, or prevent any disease.