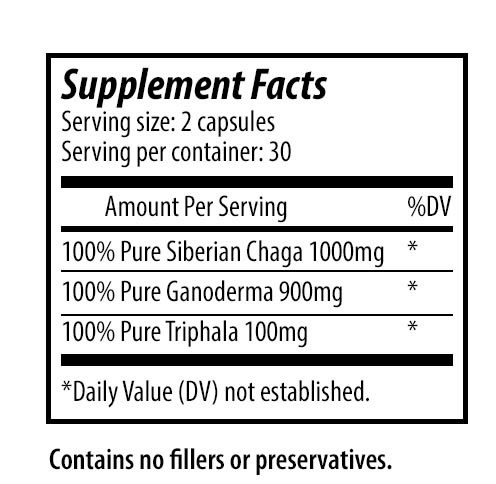 Simply put, ChaGano is the most effective supplement in the history of the market place of health supplements in the world. It is the first product of its kind in the market. It is the first to combine the two most potent herbs known to man, Chaga Mushroom and Ganoderma Mushroom plus Triphala (Amalaki, Bibhitaki and Haritaki) in one capsule. Information about these ancient, cherished medicinal herbs is readily available online. Chaga is known to grow in North America, but it is the Siberian version of this fungus that is considered to be the most effective when it comes to combating some of mankind's gravest illnesses. Ganoderma, on the other hand, grows in more humid climates such as those of the dense forests of South East Asia.Triphala is the gem of Ayurvedic medicine. It is highly regarded for centuries and the most prescribed by Ayurvedicpraticioners for many types of health related issues.

Chaga is medically approved in Russia and other Eastern European Countries to combat some of the most aggressive diseases. Because of its large amount of antioxidants, polysaccharides, and triterpenoids, Chaga is known as the king of herbs, and the gift of God and Nature to mankind. Meanwhile, Ganoderma's medicinal history goes back over 4,000 years. It was inscribed in the very first book of Chinese medicine. Ganoderma was only available to an exclusive class of people. Both Chaga and Ganoderma are considered to be the most powerful herbs for combatting arthritis, inflammation, cell oxidation, and other grave diseases. Simply put, the most oxygenating elements earth con offer. Adding Triphala to these two fungus makes ChaGano the most effective supplement in the history of the market place of health supplements in the world.

Important Note: These statements have not been evaluated by the Food and Drug Administration. This product is not intended to diagnose, treat, cure, or prevent any disease.